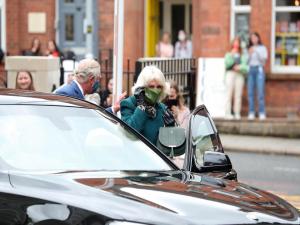 The Duchess of Cornwall has warned domestic abuse cases have risen during the pandemic after hearing the “incredibly” moving experiences of victims.

Camilla met the group when she visited Belfast and Lisburn Women’s Aid centre in the south of the city yesterday to listen to their stories.

The duchess, who toured Northern Ireland with the Prince of Wales, has spent a number of years highlighting the issue of domestic violence and has raised concerns about the problem escalating during lockdown.

We were delighted to welcome HRH The Duchess of Cornwall today to meet some of our incredible staff who remain committed to providing support to Women despite the challenges of the COVID-19 [email protected] pic.twitter.com/gZnfswMT6D

Asked if she thought domestic abuse had got worse, she replied: “I am afraid so. I would like to say it hasn’t but I am afraid to say that it has.

“We have all got to do our bit to try and break the corrosive silence around the issue. I certainly am trying to do everything I can.

“Like today, when we are allowed out, I would like to do more. The bravery of the women today was remarkable. I was incredibly moved.”

There were 8,302 domestic abuse incidents recorded in Northern Ireland between April and June during the coronavirus lockdown – an increase on the same period last year and the equivalent of 91 incidents a day.

During the visit, Camilla listened to a woman, who remained anonymous, who was trafficked to Northern Ireland via Germany from her home country of Somalia.

She tearfully recalled how four of her six children – all boys – were stabbed to death by her former partner, who also tried to kill her.

The man has never been brought to justice and after her other two children, a twin boy and girl, were taken away by their paternal grandfather, the woman – who was married at just 16 – left Somalia and has never seen them again.

She wept as she thanked Camilla for coming to hear her story, telling her: “Thank you, thank you for coming to listen. I am very very happy to see you today.”

We would like to thank the Duchess of Cornwall who visited us today. During her visit she spoke to women and young people who we have supported through our services. @Clarencehouse pic.twitter.com/thlzwJmD0K

Camilla smiled and said: “No thank you for telling us”, and made a point of going up to her afterwards and telling her: “You are so very, very brave.”

The duchess listened keenly as one middle-aged woman told her: “I was with my husband for 37 years and he became an alcoholic and my abuse got worse. I never had the strength to leave but then I rang Women’s Aid and they gave me the strength.

“I am now on my own, I have my own home, I have my self-confidence and a path I never had before.”

“What gave you the courage to leave?” Camilla asked.

“One day something just clicked. I told him I’m leaving, I told him I would not be back and I have never looked back,” the woman replied.

The Prince of Wales and The Duchess of Cornwall have arrived in Northern Ireland!

Their Royal Highnesses are visiting to thank individuals who have gone the extra mile during the pandemic. pic.twitter.com/eHQtLP4wb5

— The Prince of Wales and The Duchess of Cornwall (@ClarenceHouse) September 30, 2020