Mixing CBD and coffee is a fast-growing trend among CBD oil users — and for a good reason.

It’s more than just a commercial trend; there are real benefits to mixing CBD with coffee. The calming effects of CBD help reduce the unwanted side-effects of caffeine, such as anxiety and jitteriness. At the same time, CBD is able to enhance the mental alertness provided by your cup of morning coffee.

Would you try this win-win combo yourself?

Then you’ve come to the right place. In this article, we explain everything you need to know about mixing CBD and caffeine. We’ll cover the potential benefits, go over proper dosing, and share a few tips and tricks for using this combination to the fullest.

A Primer on Coffee, the Most Popular Stimulant on Earth

Coffee is by far the most popular stimulant brewed in the world. According to various estimates, people consume over 2.2 billion cups of coffee every day.

Coffee is praised for its ability to enhance mental alertness, sharpen focus, and reduce tiredness — all of which are attributed to its caffeine content.

Caffeine is the active ingredient in coffee. When used responsibly and in moderation, caffeine is a versatile tool for improving our productivity throughout the day. However, our obsession with productivity has resulted in excessive caffeine consumption.

We drink coffee to wake ourselves up early in the morning; we drink it throughout the day to get better results at work; finally, we use caffeine to be able to work longer hours by fooling the brain that we’re not tired.

Abusing caffeine is far from beneficial.

Side Effects of Drinking of Consuming too Much Caffeine

Most coffee drinkers have experienced its signature side-effects after having one espresso too many.

Excessive amounts of caffeine can make us feel jittery and anxious. Moreover, some people can even feel their hearts pounding out of their chests or skipping beats.

All of these adverse effects actually impair our ability to stay productive — acting against the very reason for drinking coffee.

This is where CBD comes into play. Research has shown that CBD can enhance the health benefits of caffeine while counteracting the aforementioned side effects.

What Are the Benefits of Mixing CBD and Caffeine? 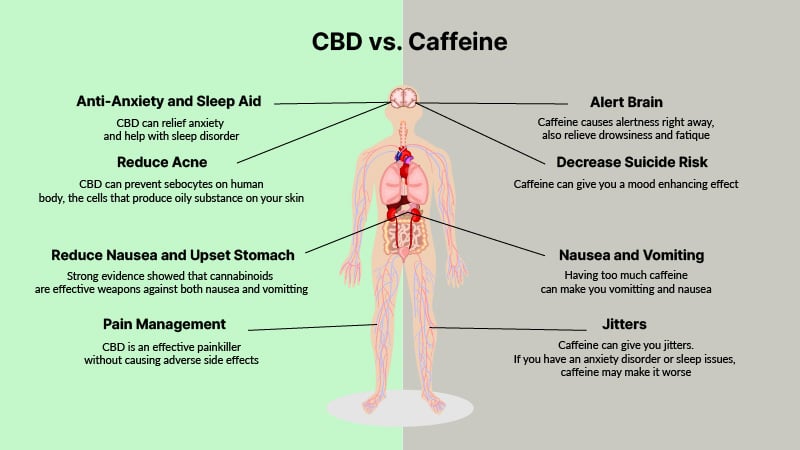 Wondering why so many people add CBD to their morning Coffee?

Here are the benefits that may convince you to jump on the bandwagon:

One of the most important neurotransmitters in the brain that controls mental alertness is adenosine.

More adenosine in your system slows down the communication between neurons. This can make you feel sloppy and tired. As we move toward the end of the day, adenosine builds up to help us relax and fall asleep at night.

As caffeine binds to the adenosine receptors itself — it blocks the access to those receptors, eventually preventing adenosine from working as intended — hence the increased mental alertness (1).

The relationship between CBD and adenosine is more complex than it is with caffeine. While caffeine is considered an agonist of adenosine, CBD is its modulator. In other words, CBD improves the efficacy of the adenosine receptors instead of inducing its effects through direct stimulation.

Other coffee-enhancing effects of CBD may be felt through its interaction with serotonin — a neurotransmitter responsible for feelings of happiness and euphoria. Increased serotonin levels are associated with greater motivation and a heightened sense of well-being (2).

2. CBD Can Curb the Caffeine-induced Anxiety

CBD is best known for its ability to reduce anxiety. CBD is a very good anti-anxiety agent because it operates on several individual mechanisms to achieve this state of mind rather than relying on one molecular pathway.

Long story short, CBD offers the following benefits for those suffering from anxiety:

All of the above effects work together to bring significant relief from anxiety — which is the reason why so many people are turning to CBD oil for anxiety and depression.

Research has also highlighted the anxiolytic benefits of CBD in various experimental models (3, 4). Anecdotal evidence from CBD oil users supports these findings — something we’re a part of as well.

3. CBD and Caffeine Extend the Duration of Each Other’s Benefits

Almost every substance that you ingest needs to be metabolized by the liver in order to be flushed from the body.

The liver uses a system of specialized enzymes (CYP) enzymes to perform its function and disassemble active ingredients in drugs, cells by-products, and other compounds in our bloodstream.

Caffeine and CBD share a structure similar enough to require the same system of enzymes to process them.

Similar to other organs, the liver’s ability to metabolize substances is limited, so if there’s a sudden influx of compounds like CBD and caffeine, the liver gets informed about that; it won’t process these compounds faster than it can.

Think about this mechanism as of the rush hour traffic. Once enough cars enter the road, it will eventually turn into gridlock. Traffic to the liver for metabolism is also slowed down.

In essence, CBD and caffeine extend the duration of effects for each other.

How to Mix CBD and Caffeine 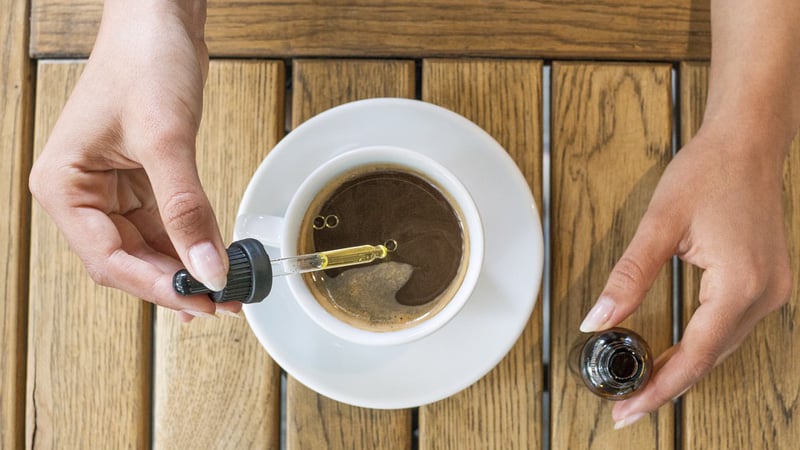 Now that we’ve established the benefits of a CBD-and-caffeine combo, let’s take a look at how you can combine CBD with your morning coffee on top of other creative ways to benefit from both compounds.

Bulletproof coffee consists of coffee and a source of fat — usually clarified butter from grass-fed cows or MCT oil from coconuts.

The brew has become particularly popular among those on the ketogenic diet for inducing a metabolic state of ketosis, where the body uses fats stored in the body as the source of energy.

The fat in bulletproof coffee is like a coal-based fuel; it burns relatively hot but lasts a long time. Sugar, on the other hand, is like jet fuel, burning very hot but lasting equally short.

This is also a great brew for a CBD infusion. Adding CBD oil to a bulletproof coffee will cause it to dissolve perfectly in the fats in your drink. If you try to add CBD oil to a regular coffee, it will just float on the top of your mug.

CBD is an excellent ingredient in the caffeinated nutritional stack. Just make sure you carefully dose each compound. Most people take around 100 – 400 mg of caffeine per day, which makes for 1 – 4 cups of coffee, whereas the average dose of CBD ranges from 20 – 150 mg daily.

Vape CBD with Your Morning Coffee

Vaping is the most effective way to take CBD oil along with your morning coffee. It’s the contemporary version of the evergreen wake-and-bake routine, except for the fact there’s no smoke in your combo.

Vaping CBD may not suit everybody, but it offers the highest bioavailability of all CBD formats out there. It can be combined easily with a morning espresso, and only takes a few seconds. Vaping also allows the user to get the right dosage and is the fastest way to experience the health benefits of CBD.

Vaping is especially useful when it comes to counteracting the coffee-induced anxiety and jitteriness.

As more people are starting to realize the benefits of mixing CBD and caffeine, some creative entrepreneurial souls have come up with CBD-infused coffee. This product is the most convenient way to combine CBD with coffee — all you need to do is brew the coffee as you normally would and you’ll get CBD in your beverage.

The only concern about this method is that it’s difficult to determine the exact dose of CBD taken with each cup unless the company specifically provides dosage instructions on the bag. But even when they do, it’s not an accurate way to measure out the desired amount of CBD.

If you want to get the best CBD coffee out there, look for products containing full-spectrum hemp extract with good-quality coffee beans. There are plenty of CBD-infused coffees on the market that use decent CBD oil, but the coffee often leaves a lot to be desired.

We prefer to drink CBD coffee from brands that put equal care into the quality of both ingredients.

CBD 101: Understand the Effects of Cannabidiol 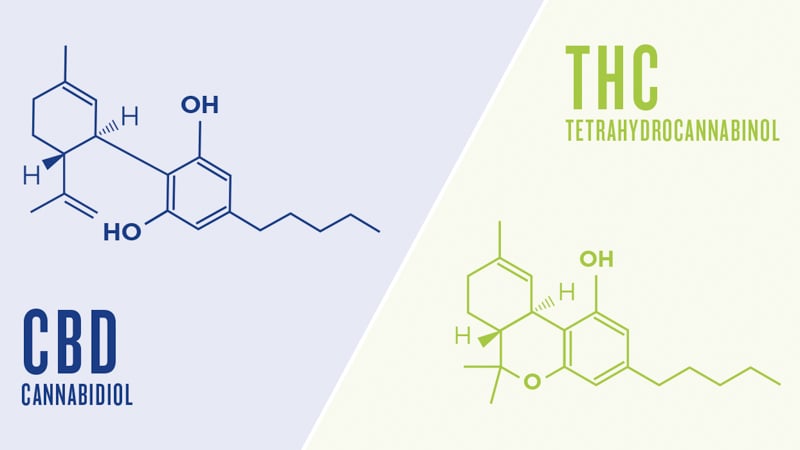 CBD is one of the two major cannabinoids secreted in the flowers of mature cannabis plants. Cannabis has been present in the history of medicine for centuries, if not millennials. It has been featured in all pharmacopeias all over the world until the dawn of the cannabis prohibition in the United States in 1937. Over 70 years later, cannabis has its redemption story, part of which is attributed to the health benefits and high safety profile of CBD.

In 2018, President Trump signed the amended version of the Agricultural Act, removing hemp from the Controlled Substances Act (CSA) as long as its THC content doesn’t exceed 0.3% THC, the psychoactive cannabinoid.

Cannabinoid receptors in humans and animals correspond with neurotransmitters known as cannabinoids. They work together to create a series of chemical interactions processed through a complex network called the endocannabinoid system (ECS). The ECS works to maintain the chemical balance between the vital functions in the body, including mood, memory, pain transmission, immune response, body temperature, appetite, stress management, neuroprotection, and more.

CBD is the modulator of the endocannabinoid system; it enhances the ECS’ performance through indirect signaling, which causes this system to produce more of its natural cannabinoids and maintain their higher concentrations in the body.

CBD products are widely available over the counter and online. CBD comes in several forms, from oil drops to concentrated oil pills, edibles, and vape liquids. You can also find CBD in topical products, including creams, gels, balms, and even bath bombs.

In its traditional form, CBD oil is taken sublingually. Consumers can take it on its own or add it to make delicious treats or brew their favorite beverages, such as coffee and tea.

The effects of CBD on the body and brain vary between individuals and depends on several factors, including a person’s age, weight, gender, metabolism, the severity of symptoms, and their previous experience with CBD.

In many cases, people report CBD to boost energy and focus. Meanwhile, other people experience drowsiness and lethargy after taking higher doses of CBD, as they can cause the blood pressure to drop temporarily.

According to studies, CBD has a very good safety profile, even in kids. That being said, it can cause a few mild side effects, such as sleepiness, changes in appetite, and diarrhea.

When people hear the word “cannabis”, they most often think of marijuana. However, marijuana is only one type of cannabis plant, one that comes with high concentrations of THC, the psychoactive cannabinoid.

THC is responsible for the deeply relaxing and euphoric sensations linked to the signature marijuana high. It also has a long list of health benefits, similar to CBD. And just like CBD, THC can be found in cannabis flowers as well as its derivatives like oils, edibles, vapes, and topicals.

Cannabidiol is non-intoxicating, so it won’t produce the high associated with THC. The reason why THC induces the psychoactive buzz lies in its affinity with the CB1 receptors in the brain. CBD doesn’t directly bind to these receptors. It can even interfere with THC’s attempt to bind to them — dampening the intoxicating effect.

Wrapping it Up: Is CBD & Caffeine the Ultimate Pairing for Your Morning Routine?

There are several reasons you might want to start mixing CBD with caffeine.

The caffeine in coffee turns out to produce synergistic effects when taken with CBD. This combination results in an improved level of productivity through increased focus and alertness. CBD and caffeine also slow the breakdown of one another, allowing them to stay available for the body for a longer duration.

Last but not least, CBD directly blocks many of the side-effects of caffeine, including anxiety episodes, shaking, jitteriness, and muscle cramping.

If you want to get the most out of your CBD-and-caffeine combo, we recommend brewing a CBD-infused bulletproof coffee for the longest-lasting effects.

Do you pair CBD with caffeine?