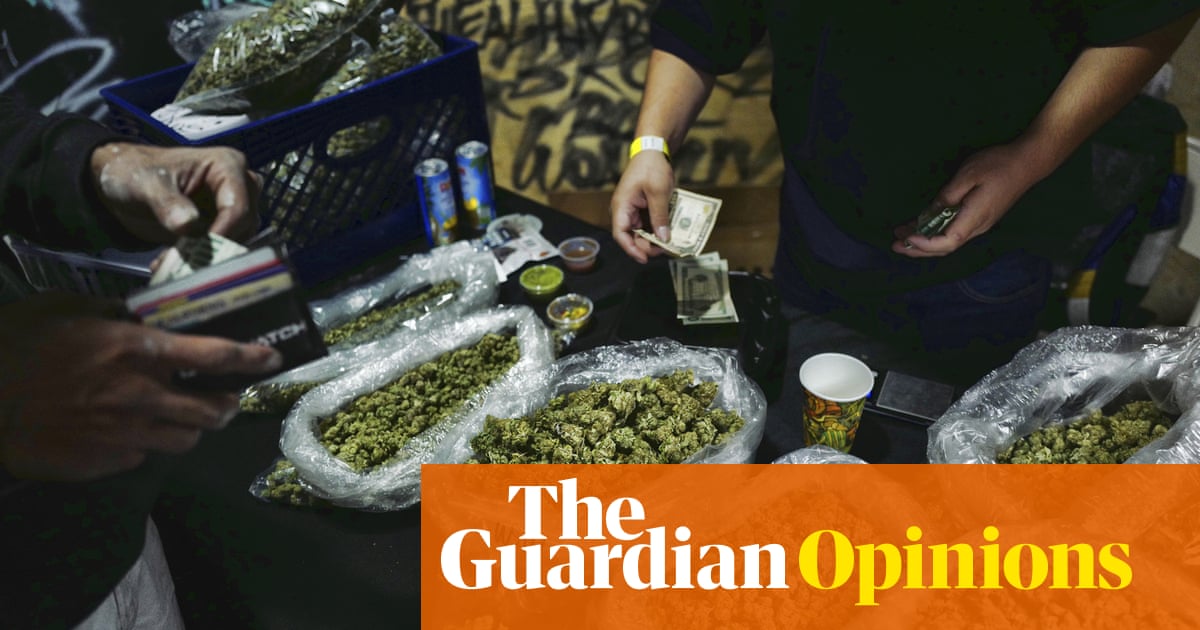 In 1942, the American political scientist Quincy Wright published a lengthy book about how to organise the world beyond endless wars. A Study of War cemented Wright’s reputation as an influential liberal thinker of the early 20th century. But Wright would help bring about a new type of endless war in his time. He was one of the first major voices to call for what would later be known as the “war on drugs”. As early as 1924, Wright argued that the use of drugs “for purposes other than medicinal or scientific” is an “evil”. While working as an adviser to the state department, Wright advocated for the US to lead a global assault against drugs.

Almost a century later, the “war on drugs” may need a new leader. Amid the chaos surrounding last November’s US presidential contest, drug policy reform quietly took a quantum leap forward. Voters from across the political spectrum chose to legalise recreational cannabis, opening the door for places such as Arizona and New Jersey to recreate the lucrative cannabis industries already found in California, Colorado and other states.

Policies are also being introduced to try to bring an end to the system of mass incarceration, and to redress the racial and economic inequalities fuelled by the “war on drugs” that became an enduring touchstone of US federal policy after Richard Nixon declared drugs “public enemy number one” in 1971. But the most dramatic change came in Oregon, which legalised cannabis in 2014 and has now become the first US state to decriminalise all drugs, including cocaine, methamphetamines and heroin.

Crucially, decriminalising these drugs doesn’t create a legal industry for them (as it has done with cannabis). Instead, decriminalisation turns the possession of these drugs into something that isn’t permitted but won’t be punished by the criminal law, much like parking your car without a ticket. If you’re now found in possession of small amounts of cocaine or heroin, you will be required to pay a fine or meet with an addiction specialist – but you won’t be arrested.

The wave of drug policy reforms washing over the US seems likely to drag President Biden with it. Once an avid drug warrior, Biden is now claiming that he would like to see a change in legislation across the whole country, arguing that “no one should go to jail for a drug offence”. This is a stark contrast to Labour leader, Keir Starmer, who has reiterated that he wouldn’t support the drug policy reforms currently being implemented in many countries.

Starmer recently took the opportunity to remind the public that he took pride in prosecuting “many, many cases involving drugs and drug gangs” when he was director of public prosecutions. The most recent Ministry of Justice statistics show that drug offences are still one the most common reasons why people end up in prison in the UK, accounting for 27% of all prisoners currently being held on remand, the largest percentage for any offence.

And drug offences are repeatedly shown to be among the main drivers of racial disparities within Britain’s criminal justice system. Black and Asian drug offenders are far more likely to receive an immediate custodial sentence when convicted than white offenders. Some might be able to overlook such injustices if the system worked. But the criminalisation of drugs has not produced the “drug-free world” that some once dreamed of. By the United Nations’ own estimation, around 275 million people continue to use prohibited drugs each year.

Wright’s description of drug use as “evil” eventually found its way into the UN’s 1961 treaty on drugs, the international law that established our current system of drug prohibition (as the legal scholar Rick Lines has shown, the phrase “evil” notably doesn’t feature in UN treaties against genocide, slavery or apartheid). Sixty years later, this portrayal of drugs continues to loom large in the imagination of politicians like Starmer, who said he sees drugs as “sitting behind” an array of social ills, including knife crime and criminal gangs.

Portraying drugs as an evil force is an example of what the cultural theorist Mark Fisher described as the “new problem of evil”. Fisher argued that we create objects of evil to fill the gaps between ideology and reality. How can a supposedly liberal, equal society reconcile this vision of itself with the reality that it produces systemic injustices? Depicting drugs as the cause rather than the symptom of these issues allows politicians to paper over the internal contradictions within their own societies, pinning the blame on drugs rather than deeper structural problems.

Over the course of the 20th century, the supposedly “evil” nature of drugs has proved a useful tool for politicians to do just this. In the US, where most drug policy reforms have been passed by ballot initiatives (popular votes), it took the people to turn the country away from this narrative. Thanks to Britain’s more archaic parliamentary system and fatigue with popular referendums, drug law reforms will be harder to create from the bottom up.

Changing our drug laws is going to require political leadership. But in a country where power is as centralised as Britain, politicians have not considered it worthwhile to try to challenge the conventional narrative around drug policy. Despite polls showing that more people support the legalisation of cannabis in the UK than oppose it, it seems that politicians will cling on to the protection that the “evil” of drugs offers them for some time to come.