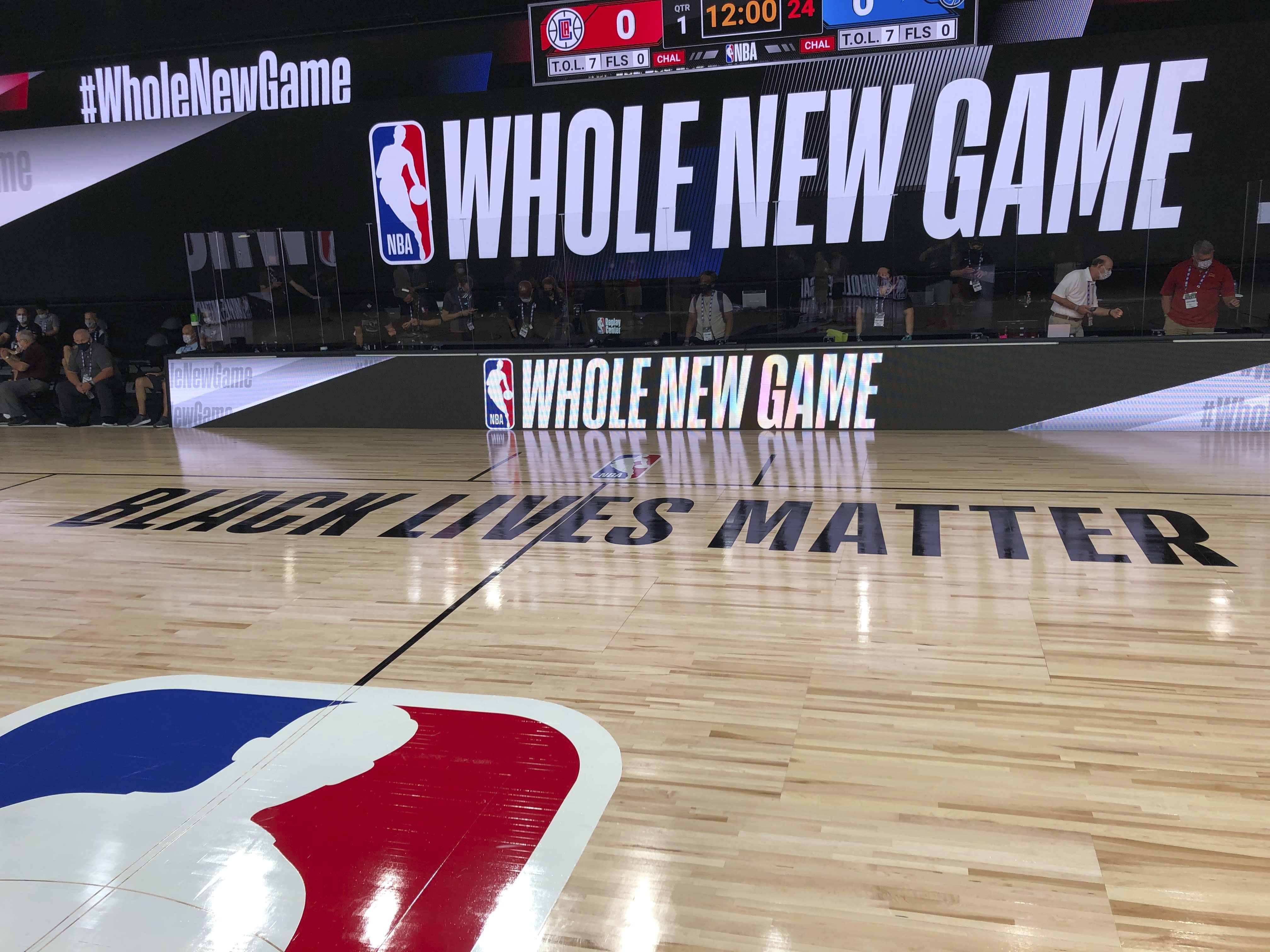 The best part of the NBA bubble is that we’re nearly a month in and the league has had zero positive tests for several weeks. The bubble is holding together due to the care, effort and consideration by all parties involved. For the most part, everyone is following the protocols, and the few who haven’t have undergone long quarantine periods to ensure the integrity of the bubble.

The second-best part of the bubble is the basketball itself. The games have largely been entertaining, with only a couple of blowouts so far. Part of that is that the players clearly took their conditioning seriously while the season was on pause. Also, players who were injured or had bumps and bruises had time to get healthy. And worn-down players are rested and ready to go.

However, the biggest reason for the quality games is that the bubble largely eliminated bad teams from the mix. By the trade deadline and All-Star break, NBA teams know who they are and they plan accordingly for the rest of the season. Playoff contenders are fighting for seeding or playoff spots. Non-playoff teams turn to youth, with a focus on pingpong balls in the draft lottery. That means there are a lot of non-competitive games over the season’s last two months.

With the NBA’s worst eight teams eliminated from the mix, the games have been competitive and close, with a number of underdogs pulling off some major upsets. How can the NBA replicate the competitiveness of the bubble during normal future seasons without completely eliminating a quarter of the league?

Let’s start with a few things that are off the table. There is no chance the NBA will ever adopt relegation. It’s simply not a workable premise in American sports. The money is too big for any owner to agree to forgo earnings for even a single season.

There is also little to no chance the NBA will go to a Nos. 1-16 inter-conference playoff seeding. The bubble, with its lack of travel, was the perfect time to try, and Eastern Conference teams still wanted no part of it. That vote is never getting passed.

Lastly, cutting the schedule from 82 games is likely a no-go. As we’ve learned, home games are lucrative for teams — and players as well.

But there is a way we could get some of the excitement of the bubble, while also maintaining a lot of the current NBA structure. The key is reworking the schedule and altering the post-All-Star break framework.

First, let’s assume the NBA calendar remains roughly the same with a late October-to-mid-April regular season. There has been buzz of permanently moving the start of the season to mid-December or even Christmas and wrapping the regular season in mid-June. But with NBA players coming out against the idea of losing their summers off, conflicts with international competitions and challenges for the 22 teams that share regional sports networks with Major League Baseball teams, it’s unlikely that change is happening anytime soon.

That means continuing to work within the current NBA calendar. But that’s OK. There is more than enough time to still make things work. Here’s a proposal for when things return to normal — whenever that might be — to keep the excitement and competitiveness of the bubble, while still hitting all the current NBA markers.

The regular season would start at the beginning of the third week of October. It would last for 62 games and end in mid-February at the All-Star break. That’s 3.6 games per week over 17 weeks, which is roughly the same pace as a normal season. The breakdown of the 62 regular-season games:

In this scenario, every team still plays everyone at least two times per season, home and away. That means East Coast fans don’t miss out on their once-a-year visit from the Los Angeles Lakers, and West Coast fans still get to see Eastern Conference teams once.

Another benefit of the bubble? Players are fresh and healthy for the most part. Now, you can’t plan a four-month long break into every season, and here’s to hoping we never have to again. But what you can do is lengthen that midseason break. As it stands now, the All-Star break lasts for roughly a week. You know who that’s not really a break for though? Anyone taking part in All-Star Weekend. Those players, coaches and staffers usually leave right from a game to the All-Star city and stay there through the weekend. They then get a couple of days off before returning to their team in the middle of the next week.

In this proposal, we’re making the All-Star break three weeks long from mid-February to early March. It’s not enough to truly heal everyone, but it’s enough time for players to get a real break and rest up for the stretch run.

The added time is also necessary for the NBA and its teams to work out the schedule for what we’re calling the seeding and lottery games.

This is where we separate the wheat from the chaff, and it starts to look like the bubble. Whether by purpose or happy circumstance, the NBA seems to have hit on something with 22 teams, so we’re sticking with that, but with a tweak. In this scenario, we’re taking the top 11 teams from each conference into the seeding games. Hopefully, by splitting the league a month earlier than this year, each conference will have 11 teams in playoff contention most seasons.

The 22 teams in the seeding games will play the other 10 teams in their same conference twice each for a total of 20 games. That puts those 22 teams at 82 total games. Because all the games are conference games, you get a lot of excitement as the seeds and playoff spots are worked out.

We’re also keeping the play-in scenario because it’s fun and it keeps teams alive that much longer. We’re going to keep it exactly the same as now. If the ninth seed is within four games of the eighth seed, there is a play-in series. The ninth seed will need to win two consecutive games to advance. Play-in games will be hosted in the arena of the eighth seed, giving it even more of an advantage.

Teams 9-11 in each conference will be slotted into the NBA draft in the 9-14 positions by inverse record of the combined regular season and seeding games. No lottery for them, as they had a chance to qualify for the playoffs.

Yes, this means the lottery-game teams will play 83 total games. The good news is that another game brings more revenue into the league, which helps everyone. And by having these teams play each other three times, you break any ties. The extra home game will be decided by best record through the regular season.

Here’s where things get interesting. Teams are playing lottery games to win. Whoever has the best record after the 21-game contest gets the most pingpong balls in the lottery. The proposed breakdown:

Now, one might want to know why players would play hard to increase the chance their team will draft someone to replace them? That’s a fair question, but each year there are teams in the lottery by circumstance as opposed to being an actual bad team. For example, imagine the Golden State Warriors this season. They’d have a chance to play meaningful games in March and April to try to add a high draft pick for next season.

For those other teams? Well … bad teams are bad teams for a reason. And as we’ve seen in the bubble, when players play, they play hard no matter the circumstance.

Both the seeding and lottery games would take place over six weeks from early March to mid-April. It would end up being an average of about 3.3 games per week, which is a nice ramp down as the season comes to an end.

Here is how the overall calendar would look:

Essentially, the NBA season would divide into three distinct portions. The regular season gives everyone a chance to prove who they are and that they are deserving of a chance for a playoff spot. The seeding and lottery games become almost a sort of second season, like what we have with the bubble. But in this version, the lottery-bound teams still have something to play for. And then you have the playoffs, which is the most exciting part of the season and will remain so.

While there are still some pitfalls to figure out, this type of schedule and in-season alteration would bring late season excitement to the NBA, which is all too often lacking. Almost everyone has something to play for right up until the season’s final week, and that’s how it should be.