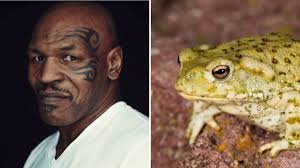 Both fighters looked pretty exhausted after their bout that ended in a draw last night. Maybe the moral of the story is don’t believe the Toad venom !

Tyson said it was toad venom that helped him get back in shape and ready to fight again.

“I took the medicine, and the medicine told me to get into shape,” he said, via USA Today. “It really blew my mind. It told me to come back and start getting in shape.”

The Addiction Center released a report in October 2019 calling toad venom a “trendy new psychedelic” and comparing it to mescaline. The drug comes from a toad native to the Sonoran Desert that produces venom known as 5-MeO-DMT. It’s reportedly about six times more powerful than the hallucinogenic DMT, or N,N-dimethyltryptamine.