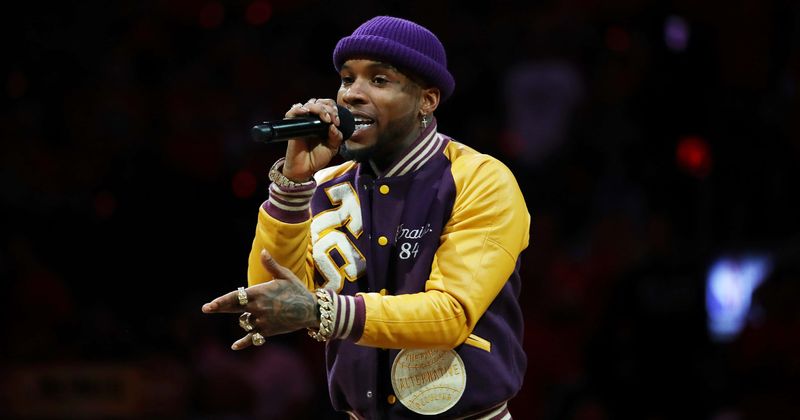 The latest music video by Tory Lanez, titled ‘Most High’ is getting a lot of attention, despite the Canadian rapper facing a bombardment of criticism in the wake of the Megan Thee Stallion shooting. Currently, the ‘Most High’ visual has taken the No. 3 slot on YouTube’s trending.

Lanez was arrested on July 12 after a supposed argument broke out between the rapper and rumored girlfriend Megan Thee Stallion outside a party at a private residence around 4.30 am, and shots were fired into the air. The incident reportedly led to Stallion being shot in the foot, which Stallion said was caused by Lanez. The rapper reportedly posted $35,000 bail and was released at 10 am that same day. He was booked on felony charges of carrying a concealed weapon in a vehicle.

Lanez has tried to make up with Stallion on social media but hasn’t admitted to shooting her. Now with ‘Most High’, Lanez is addressing the ongoing backlash he has received from critics and is declaring innocence. The video opens with Lanez in court and being acquitted as he raps, “Uh, stepped out on bail, I did a Diddy Bop. I had to tilt my hat at the city cop. I walk away free ’cause I’m innocent. And when I walk, the whole world know a n***a wild (He’s wildin’).” In the next scene, the rapper goes head-to-head with the devil in a boxing ring. “Uh, devil want a n***a soul, I beat that n***a thousand times in a row, Couple weeks ago, he thought he threw his best shot, All I’m lookin’ at is Twitter playin’ friend-or-foe,” he raps over a thumping beat and trumpet loop and it is clear the video is also a celebration of his freedom. Lanez is then seen relaxing on a beach and rapping that he has found a new girlfriend: “I got a whole new chick, mean. We on the Island and she f**k me like she off a bean.”

‘Most High’ is one of many tracks on ‘Daystar’ that addresses allegations surrounding the incident with Megan. ‘Money Over Fallouts’ cuts together numerous news snippets and soundbites of talkshow hosts disparaging the rapper and circulating rumors about what happened on the night of the shooting. One of its lines outright denies that he shot her in the foot: “Gotta see a couple questions. How the f**k you get shot in your foot, don’t hit no bones or tendons? How the f**k your team is trying to pay me in some whole millions? I just lost like $10 million dollars because this cold business. But I got like 10 million followers that’s gon’ roll with me. Fans that support me because they know my heart.”

Last night, in a now-deleted post on Instagram, Lanez made a statement in another religious tone. “I don’t move on social media’s time. I move on Gods time. I don’t operate in fear I operate in FAITH,” he said. “I don’t bow down to the lies of man . I stick with the TRUTH of god . And for those reasons . It doesn’t matter who rises against me in this hour and small season . BIG OR SMALL OBSTACLE …. I will PREVAIL and RISE to GREATNESS . As GOD SAID I WILL.”