Admission is $100 for a tented, reserved table for six people; there will be 60 additional chairs that will be theater-style facing both sides of the stage that will be $12 per person. The event is a benefit for Washington Elementary School. To order tickets, tinyurl.com/y4t3e8lp. 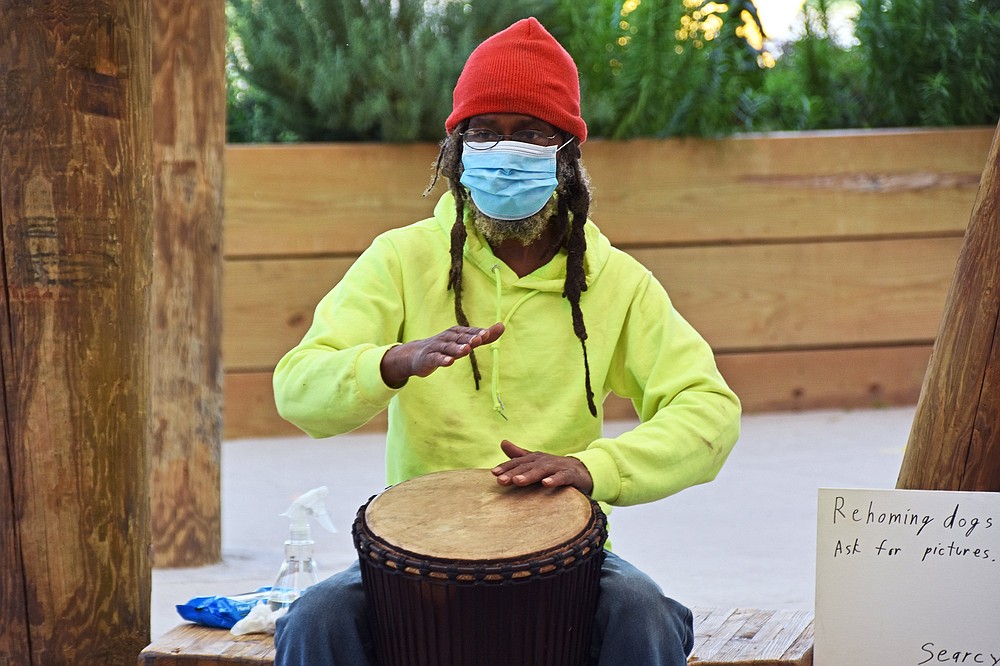 ◼️ Percussionists of all levels and skills are invited to a Drum Circle on the final Saturday of the year, at Bernice Garden, 1401 Main St., in Little Rock. Searcy Ewell will facilitate. Donations are encouraged, masks are required and physical distancing will be practiced. Drums, chairs and hand sanitizer will be supplied. No musical experience is needed.

Mike Mayberry and The Slow Hands will perform at 9 p.m. Friday and Saturday at The Big Chill, 910 Higdon Ferry Road, Hot Springs. Admission is $5.

Erin Enderlin will perform at 7 p.m. Saturday for an outdoor show at the Momentary, 507 Southeast E St., in Bentonville. Tickets are $10.

Bluegrass legend Del McCoury, along with opening acts Opal Agafia and Friends of the Phamily, will perform at “Delberry,” at 7 p.m. Saturday at the Farm Campgrounds, 1 Blue Heron Lane, near Eureka Springs.

Tickets range from $15 to $100, available through stubs.net.

The Dave Adkins Band will perform at 4 p.m. today at the Turkey Track Bluegrass Festival, 1308 Turkey Track Drive in Waldron. Admission is $20.

Those wishing to contribute to programs that benefit people affected by cancer should see Theatre Within and Gilda’s Club, which offer free workshops such as songwriting, art and meditation to cancer patients and survivors and to children who have lost parents to the disease. You can also donate through LennonTribute.org.

Speaking of John Lennon — and observances of his birthday — Arkansas PBS (formerly known as AETN, KETS-TV) will show a documentary at 8 p.m. Friday on the making of Lennon’s first post-Beatles album, “John Lennon/Plastic Ono Band”, in 1970. It will feature interviews with Yoko Ono, Ringo Starr and bassist Klaus Voormann, along with archival footage and recorded interviews with Lennon.

The network is celebrating the making of the greatest albums in pop, rock and heavy metal music. Future documentaries to be shown will cover the careers of Pink Floyd, Fleetwood Mac, The Doors, Grateful Dead, The Band, The Who, Cream, Queen, Meatloaf, Elvis Presley, Black Sabbath, Rush, Carly Simon, Elton John and Phil Collins. 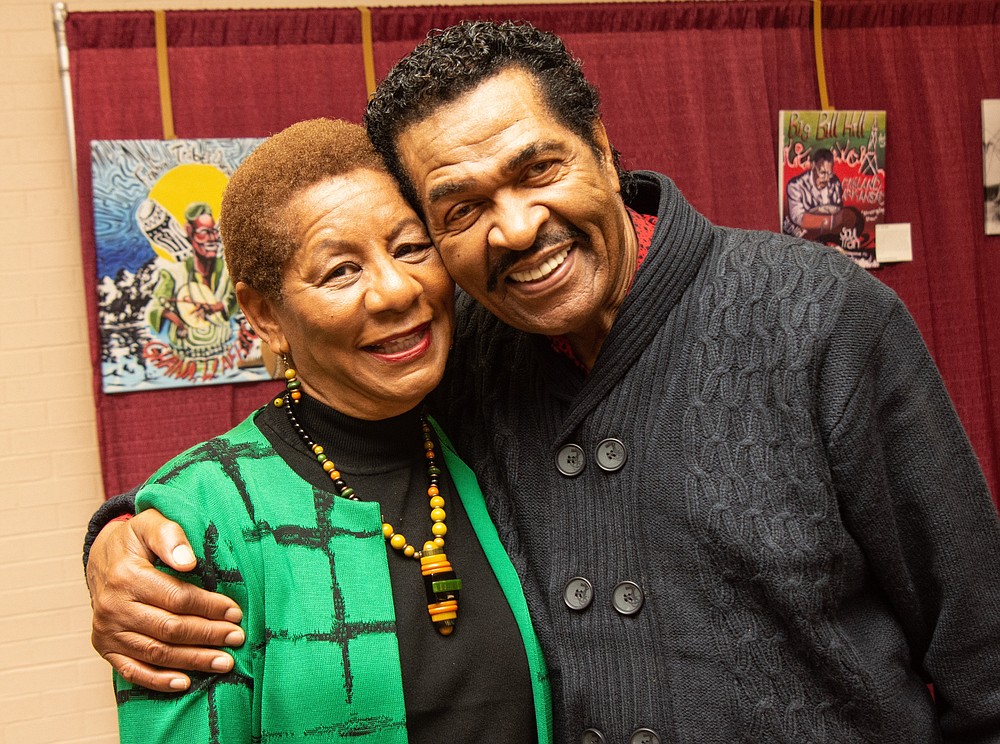 Bobby Rush, seen here with Pine Bluff Mayor Shirley Washington, will be among the acts featured in a virtual edition of The King Biscuit Blues Festival this weekend.
(Democrat-Gazette file photo/Cary Jenkins)

◼️ The King Biscuit Blues Festival, held annually in Helena-West Helena, will not be held live this year, but it will be celebrated this weekend. “Arkansas Sounds Presents,” from the Central Arkansas Library Systems, will present a tribute to past street scenes, sounds, interviews and performances from 8 to 10 p.m. today.

Bobby Rush, Michael Burks, Sonny Payne and Bubba Sullivan will be featured in a 35-year history of the festival. To watch and hang out in a digital room to watch, download Kosmi.io.

On Saturday and Sunday, the virtual version of this year’s festival will feature Brotha Ric Patton, Youngbloods of Hot Springs, Charles Wilson Band, Andrea Staton, Marcus “Mookie” Cartwright, Big T, Reba Russell, Paul Thorn, Keith Russell & the Big Muddy Band, along with Bubba Sullivan of Bubba’s Blues Corner and Munnie Jordan, executive director of the festival. The festival can also be seen on kosmi.io or YouTube. Donations can be made at PayPal or Venmo.

◼️ Future Islands, perhaps one of the most intriguing bands that we’ve ever witnessed at Stickyz Rock ‘n’ Roll Chicken Shack, will perform “A Stream of You and Me,” a livestreaming concert at 9 p.m. Friday. To watch the concert, the cost is $15. See noonchorus.com/future-islands/.

The band released a new song, “Born in a War,” on Tuesday. To watch the video of the song, see the Future Islands YouTube page.

◼️ Richard Thompson‘s third and final show in a series of three “Live From London” livestream performances — this one devoted to fan requests — will be at 4 p.m. Sunday. Tickets are $20, available through boxoffice.mandolin.com.

◼️ Rufus Wainwright will present “Rufus-Retro-Wainwright-Spective!” a virtual livestream tour of all his albums in chronological order, starting at 4 p.m. Friday with part one of his 1998 self-titled debut album.

◼️ Roger Waters, the co-founder of Pink Floyd, has a concert film, “Us + Them,” which was filmed in Amsterdam in June 2018. The film is available on a variety of formats: for sale or rental on Apple TV and Amazon Prime Video; as a DVD on Amazon; and as a download on qobuz.com.

◼️ Country singer-songwriter Ingrid Andress will perform a streaming show at 4 p.m. Friday to benefit the Grammy Museum, which is starting a new livestream series, “Collection: Live,” with proceeds benefiting the museum’s music education initiative and to help keep the museum’s mission alive while its physical location remains closed due to covid-19.

Andress will perform songs from her debut album, “Lady Like.”

Tickets are $4.99, available at grammymuseum.org.

◼️ The Cate Brothers, one of Arkansas’ most legendary rock bands, and film director Benjamin Meade will take part in Zoom event, “Speakeasy,” from 4 to 5 p.m. Sunday in conjunction with the Hot Springs Documentary Film Festival. Viewing is $15; free to festival All-Access VIP pass-holders. See [email protected] for information.

◼️ Brothers Osborne will perform a streaming show at 6 p.m. Friday. Use this link for viewing: umgn.us/SkeletonsEvent.

◼️ Hanson will perform at 7 p.m. Friday, live at their hometown venue, Cain’s Ballroom in Tulsa. See hanson.net for more details. Subsequent shows will be broadcast Nov. 5, Dec. 4 and Jan. 8. Tickets are $160 per table or $40 per person.

◼️ Singer-songwriter Malcolm Holcombe will perform his “Backyard Shed Series #7” at 1 p.m. Sunday. He will do an acoustic performance of “Pretty Little Troubles,” an album he released in 2017. Holcombe has been a frequent performer at White Water Tavern in recent years.

The performance can be viewed at youtube.com/malcombholcombe and facebook.com/malcolmholcombe. Those wishing to leave tips can do so on paypal.me/GypsyEyesMusic or venmo.com/GypsyEyesMusic.

◼️ Carly Pearce, Jeannie Seely and Josh Turner will perform live at 6:30 p.m. Saturday at the Grand Ole Opry on the Circle network, available on YouTube, Twitter and Facebook channels or on the DISH network and, with an antenna in Central Arkansas, Channel 11.5. Arkansas native Bobby Bones hosts the show.

◼️ Arkansas native Ashley McBryde is tied with Dan + Shay, Kelsea Ballerini, Luke Combs, Sam Hunt and Thomas Rhett for the most nominations for the 2020 “CMT Music Awards,” which will air at 7 p.m. Oct. 21 on a six-network simulcast across CMT, MTV, MTV2, Logo, Paramount Network, Pop and TV Land.

The CMT Awards are country music’s only entirely fan-voted awards show, and voting continues on vote.cmt.com until 11 a.m. Monday.

The festival will be on YouTube. For more information, see aclfestival.com.

◼️ Trey Anastasio of Phish will host “The Beacon Jams,” an eight-week virtual residency, live from New York City’s historic Beacon Theatre, every Friday at 8 p.m. from this Friday through Nov. 27. The events will be streamed free exclusively on Twitch.