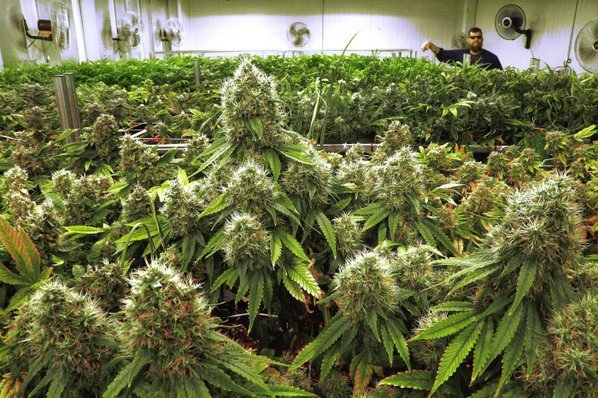 Of the 37 dispensaries that the Arkansas Medical Marijuana Commission has awarded licenses, 31 are in operation.

There are also eight licensed cultivation facilities in the state, five of which are in operation. In addition, seven operating dispensaries are growing marijuana on-site. Under state law, dispensaries may have, at any given time, 200 plants growing on-site, 50 of which may be mature.

“It was really a perfect storm of issues that caused that delay, but thankfully things are moving much smoother now,” Scott Hardin, spokesman for the state Department of Finance and Administration, said Tuesday. “It’s a much more patient-friendly industry at this point, hopefully.”

Dr. Ronda Henry-Tillman, chairwoman of the Arkansas Medical Marijuana Commission, cheered the number of dispensaries in operation at the panel’s meeting earlier this month.

“Thirty-one are open dispensaries. That’s pretty good. Thanks everyone for working so hard,” she said.

There’s no deadline for the pending dispensaries to open, though the commission encourages the owners to launch operations as soon as possible.

Hardin said he did not anticipate anything preventing the remaining six from opening. Those include a dispensary each in Little Rock, Fayetteville, Osceola and Hardy, and two in Pine Bluff.

One of the pending dispensaries, MissCo Cannabis Dispensary, is licensed in Osceola but had requested to transfer locations to Jonesboro. The Medical Marijuana Commission voted 4-1 to deny the transfer request at its meeting earlier this month.

Two other dispensaries, Arkansas Green Cross Cannabis in Hardy and Nature’s Herbs and Wellness of Arkansas in Pine Bluff, are working toward opening but have not yet requested inspections from the state Alcoholic Beverage Control.

Once an inspection takes place, the results are submitted to the Alcoholic Beverage Control director, who makes the determination to issue approval to open for business.

Amendment 98, the constitutional change approved in 2016, allows for a maximum of 40 licensed dispensaries in the state. If the commission decides to issue the remaining three licenses, it must do so by January.

Also at this month’s meeting, commissioners approved the sale and transfer of Natural State Wellness Enterprises Cultivation, as well as a location change. The facility is one of two cultivators in Newport. The new owner has changed the name to Good Day Farm and is developing its new cultivation facility in Pine Bluff.

The company plans to operate the Newport facility until the development in Pine Bluff is completed, and the move to Pine Bluff is expected to happen in the first half of 2021.

Sales of medical marijuana in Arkansas have trended upward since mid-March. Hardin attributed the rise to the recommendation from health officials at the onset of the covid-19 pandemic that Americans maintain a two-week supply of medication at home, and the numbers have stayed high.

Sales average about $600,000 daily across the state. The largest single day of sales to date was Nov. 20, when Arkansans spent $850,000 on medical marijuana. Fridays are typically the largest day for sales in any given week, Hardin said.

Since May 2019, Arkansans have spent $187 million to obtain 28,674 pounds of medical marijuana. The Department of Finance and Administration anticipates that sales will reach 30,000 pounds by late December.

Green Springs Medical, in Hot Springs, has sold the most overall since opening in May 2019, with 3,355.79 pounds sold. The Releaf Center in Bentonville wasn’t far behind, having sold 3,131.07 pounds since opening in August 2019.

The Tax Procedure Act prohibits the Department of Finance and Administration from disclosing the amount of money generated by an individual or company, so the agency only shares the weight sold by individual dispensaries and overall revenue generated across dispensaries.

As of Nov. 20, there were 60,013 active medical marijuana cardholders in the state, according to the Arkansas Department of Health. The cards are available to patients who have at least one of 18 qualifying conditions, or to their caregivers. Purchases are limited to 2.5 ounces of medical marijuana every 14 days.

Because of the pandemic, patients can now obtain doctor approvals without clinic visits. Expiration dates on patient ID cards are also being extended until the emergency declaration for coronavirus is concluded.