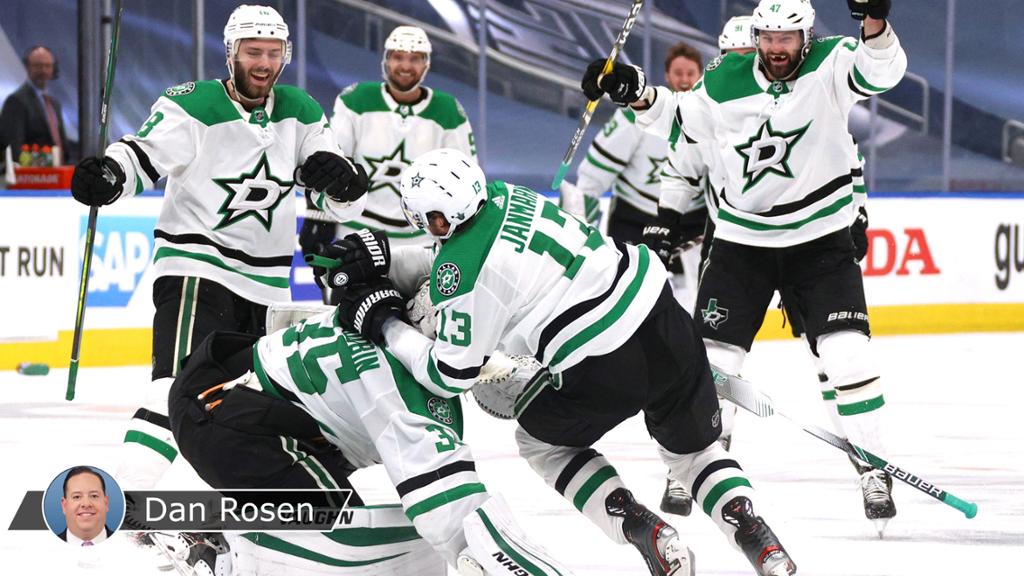 Down a goal against the Vegas Golden Knights going into the third period of Game 5 of the Western Conference Final, down two 15 seconds into the third, the Stars did what they have done better than any team in the NHL this season.

They rallied for the win Monday.

The Stars are in the Stanley Cup Final.

Dallas will play the winner of the Eastern Conference Final between the Tampa Bay Lightning and New York Islanders. The Lightning will have their first chance to eliminate the Islanders in Game 5 at Rogers Place in Edmonton, the hub city for the conference finals and Cup Final, on Tuesday (8 p.m. ET; NBCSN, CBC, SN, TVAS).

“We always know that it might take the whole game with us,” Stars center Tyler Seguin said. “We’re a confident group going into the third period, coming back in games. There’s no panic. There’s composure, just knowing that we’re going to get the job done.”

The Stars have won an NHL-high 12 games this season (regular season and postseason combined) when they have trailed going into the third period. They’ve done it three times in the postseason, including in each of their past two series-ending wins.

“Belief, our depth and the stuff we’ve gone through as a group over the years,” Seguin said. “This year, there’s just been so much stuff that has happened to us.”

Their coach, Jim Montgomery, was fired out of the blue Dec. 10, when the Stars were 17-11-3 through 31 games, for unprofessional conduct. He was replaced by Bowness, who for now still has the interim tag on his title.

The Stars struggled to score for most of the season, averaging 2.58 goals per game, 26th in the NHL.

They lost their last six games (0-4-2) in the regular season before the coronavirus pandemic stopped the world, forcing the NHL to pause the season March 12.

The Stars got back together in July and went to Edmonton.

They lost their first two games in the bubble in the round-robin portion of the Stanley Cup Qualifiers, including 5-3 to the Golden Knights on Aug. 3, when they ironically had a 3-1 lead going into the third period and couldn’t hold it.

Then goalie Ben Bishop got hurt, and Anton Khudobin had to step in as the new No. 1.

“I mean, it’s been a crazy year right from the start,” Benn said, “but we’ve stuck together as a group and played some fun hockey.”

Like falling behind 3-0 in Game 6 against the Calgary Flames in the first round only to rally for a 7-3 win.

Like being down 2-0 against the Colorado Avalanche in Game 2 of the second round and coming back for a 5-2 win.

Like losing Games 5 and 6 to the Avalanche and allowing a goal to fall behind 4-3 with 3:40 remaining in the third period of Game 7, only to have Kiviranta score 10 seconds later and then win it in overtime, completing the unlikeliest of hat tricks.

Or like being outshot 166-118 by Vegas in the conference final only to go 4-1, winning each game by one goal, two in overtime, to improve to 10-1-0 in one-goal games and 5-0 in games decided after regulation in the postseason.

“We brought in some great veteran players, great leaders into our team this year, [Corey] Perry, [Joe] Pavelski, [Andrej] Sekera. It really helps in the room,” Benn said. “We have a resilient group. We enjoy the challenge. Once again, found ourselves down one going into the third, our goalie keeps us in it, and we find a way to get it done.”

Khudobin made 34 saves, winning for the eighth straight time when he makes at least 30 saves.

He allowed five goals on 109 shots (.954 save percentage) in the past three games after getting the mercy pull (not his fault) in Game 2, when he allowed three goals on 27 shots in 40 minutes.

“He’s always been that goalie in practice that you don’t love shooting on because you don’t score much,” Seguin said. “He reminds me of a guy named Tim Thomas a little bit. He’s competitive, works hard, and he’s getting the job done.”

Khudobin was the third-string goalie behind Thomas and Tuukka Rask with the Boston Bruins in 2011, when they won the Stanley Cup against the Vancouver Canucks, who had Bowness on their bench as an assistant coach.

He was the backup to Rask in 2013, when the Bruins, with Seguin, lost to the Chicago Blackhawks in the Stanley Cup Final.

Khudobin was supposed to be the backup to Bishop this summer, but an injury led to the opportunity, and his consistency has given the Stars a chance to show their resiliency.

It happened again in Game 5.

If it keeps happening, the Stars might have enough drama left in them to win four more.