Recreational cannabis has been available legally in Maine since October, but the roll-out has been incredibly slow-going. Not only was Maine the state to take the longest between legalization and the finalization of licenses, but dispensaries themselves have struggled in their first few weeks open.

Maine has a complicated regulation and licensing system. It requires vertical integration, meaning companies cultivate, manufacture, and distribute their own product. Each of those steps also requires a different license. Since cultivation licenses were issued just one month before dispensaries were set to open, it simply hasn’t been possible for companies to meet demand on their own.

Many companies have had to outsource and buy products from the medical market to stock their shelves. Dispensaries saw themselves with not only limited quantity but limited diversity of product and strains. Some had to operate with adjusted hours.

When Wikileaf first reported on Maine’s initial days opening, we spoke with the leaders of Sweet Dirt who were purposely waiting to open in order to ensure their shelves weren’t too sparse in their first few weeks.

“We have been working with local like-minded partners here in the state to put together the supply so that we can open up the stores are really feel comfortable that regardless of our success, we’re not going to be in a position that we’re going to run out of product at any time,” said Jim Henry, the CEO of Sweet Dirt.

Henry says everything he’d predicted would happen with supply issues did come to fruition, and he’s grateful the company chose to wait to open. 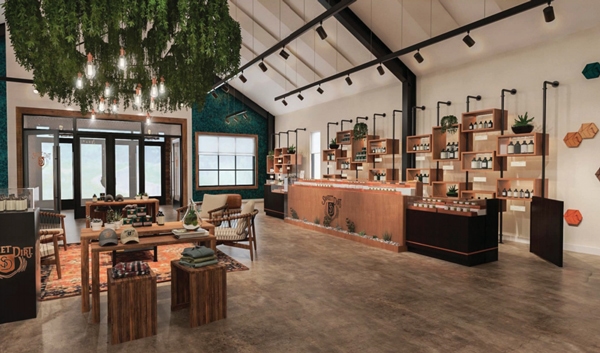 “We are running up against decades of smear campaigns on an organic product, and because of that, we have to be at our best.”

Jessica Oliver, the Senior Vice President of Operations for Sweet Dirt, says the company has partners not only providing access to different strains, but also different edible products.

Oliver was at Sweet Dirt’s new store in Waterville, preparing for the store’s opening when she spoke on the phone with Wikileaf.

“We really will span the spectrum of available products in the adult-use market, and we don’t anticipate that we’ll have to limit purchases at all, so we’re very excited about that.”

When the state was first drawing up regulations for licenses, it limited applications to solely companies based out of Maine. That was challenged and eventually dropped, resulting in out-of-state players bringing in already-established businesses to compete with the new ones starting up for the first time.

Henry, who boasts an extraordinary level of hometown pride, held some slight misgivings about that, though he emphasized he supports anyone involved in the cannabis industry.

“To allow out-of-state companies into the state like they are doing, it really doesn’t allow Mainers to get a leg up on this program,” explained Henry. “This allows very large, billion-dollar companies to come in from out-of-state and really throw a lot of money around, where hard-working Mainers are setting up shop and doing all the right things and paying the price for the compliance the state requires. So it’s a challenge for organizations like ours, but at the end of the day, we have been very successful in navigating those choppy waters, and we feel like we’re stronger because of it.”

Sweet Dirt is putting out high-quality, “artisan” cannabis in an elegant new storefront that sits front-and-center as you enter Waterville. That town is home to Colby College, a renowned liberal arts school.

“It’s taken us about a year and a half to get to this point. It’s been a labor of love. We’re really proud to be part of the Waterville community,” said Oliver, also laying on praise for the local government in the area. “Everybody is really enthusiastic. We feel blessed to be part of this community.”

In Maine, companies need separate licenses for medical and recreational cannabis. That means the production, manufacturing, and storefronts all have to be separate. For that reason, many companies chose to switch their focus to solely one branch or the other. Sweet Dirt is maintaining both its medical and adult-use products available – something Henry says he’s very proud of.

“We support those folks that have been with us. The hundreds of customers and patients that we have down in Eliot, we continue to support them and give them access to very quality product for very real needs. The reason why medicinal cannabis saw a jump at the beginning of the pandemic. This is a solution for people during very trying times.”

Henry says that by having the company’s feet in both sectors, it allows them to proliferate their product and provide access to cannabis for those who need or want it.

Sweet Dirt has a dispensary open in Portland, Maine. Another Sweet Dirt dispensary in Eliot and a second in Portland are opening soon. The location in Waterville has its grand opening Wednesday, December 9th.

“I grew up in this state, I grew up an hour away from Waterville. I’ve known the community my whole life. I love central Maine. The people of central Maine are as open and hard-working as any people I’ve ever met. It’s just an incredible community to be a part of.”

Henry says across the cultivation, processing, sales, and so on, Sweet Dirt is responsible for over 150 new jobs.

Theory Wellness was one of the first vertically-integrated medical companies in Massachusetts. Now, the company is using that same model for recreational cannabis in Maine.

The company’s flagship recreational store opened February 29th of 2020 in Massachusetts and got shut down a month later for coronavirus. The business owners feel their experience adjusting to safe, comfortable retail for both consumers and workers has also helped with the setup for the new stores in Maine.

Theory Wellness isn’t quite the out-of-state monolith to come swooping in that other Mainers feared. Two of its founders are from the Pine Tree State; they met at Colby college, and are now working to grow their business in Waterville.

“We were still really hungry about moving into Maine because of how much we love the state. We have so much connection there. And also, we know some of the best growers in the country – or even the world – are located up there. We saw that as the forefront,” said Thomas Winstanley, the Vice President of Marketing with Theory Wellness.

Winstanley feels the company’s experience in Massachusetts has made it more ready and able to get things moving quickly in Maine. However, like many other new recreational dispensaries in the state, Theory Wellness also saw issues with supply in their first few weeks open.

“That’s part of the challenge that we’re currently navigating – finding a balance of producing product in-house, getting those systems in place, but also filling the void of product that doesn’t exist on the recreational side.”

Winstanley says the company has been purchasing high-quality plants from medical cultivators and then processing those plants itself to keep its shelves stocked.

“We’re not without our challenges. We actually got our retail license about a week before we got our manufacturing, production, and cultivation licenses. So we’ve been trying to adapt the operation accordingly throughout.”

Facilities creating the future of cannabis in the state

The cultivation, manufacturing, and production teams for Theory Wellness are in Waterville.

Right now, the company has a dispensary in South Portland, Maine, and is working to open one in Waterville.

“We think cannabis access should be available for all. Certainly, this has been another big step in that process for us, and our involvement has been nothing short of exciting from Day 1.”

Winstanley says Theory Wellness is still a young company and operates similarly to a startup.

“One of the things that becomes the most exciting for us as a young company is we look at the opportunity. What does the future of cannabis look like? We don’t really know that. So part of the fun for us is trying to figure out, are our dispensaries going to be more like an apothecary, or are they going to be more like a pharmacy? Or your wine shop or a cheese shop or a museum?”

Theory Wellness’ location in Waterville should open within the next few weeks.

The company is just waiting on its final inspections to finish up.