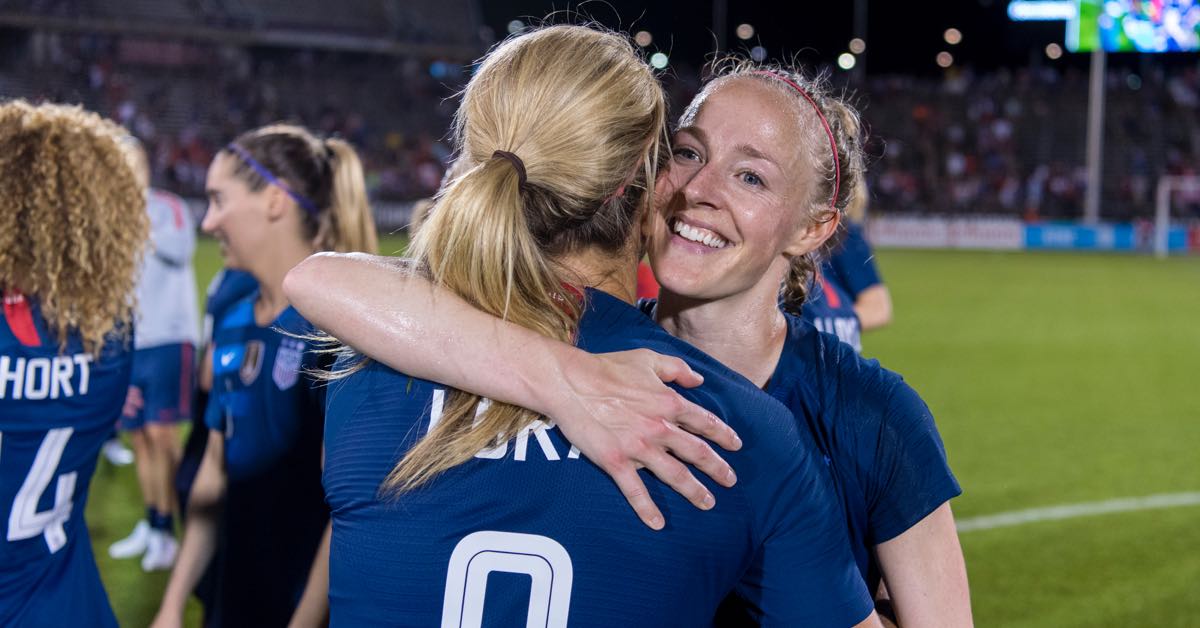 Just two games remain in the NWSL Fall Series, but the top two places in the standings are set following an action-packed weekend. Portland Thorns FC clinched the Verizon Community Shield with a 2-1 victory over OL Reign on Saturday night, finishing the four-game slate with 10 points. Becky Sauerbrunn and Lindsey Horan played full 90s for Portland, with Horan drawing a foul to set up the game-winning penalty kick. October camp call-in and 2017 U.S. Soccer Young Female Player of the Year Sophia Smith went 75 minutes for the Thorns while Allie Long and October call-up Bethany Balcer featured for OL Reign.

A unique feature of the NWSL Fall Series saw every club partner with a small business or program in their local market. By finishing the competition with the most points, the Portland Thorns were awarded the Verizon Community Shield and a grant of $25,000 to present to their community partner of choice. The second and third-place clubs will be awarded grants of $15,000 and $10,000 for their partners, respectively.

The Houston Dash will finish second with nine points. The Washington Spirit sit in third place with seven points from four games and a plus-1 goal difference, but could be passed by the North Carolina Courage, which has four points and a minus-2 goal difference, but has one match left to play.

The Dash, winners of the 2020 NWSL Challenge Cup, earned their second-place finish in the Fall Series standings by closing out its campaign with a 2-1 victory over the Orlando Pride. The Dash were powered by the performance of October Camp call-ins Shea Groom and Kristie Mewis. Groom opened the scoring with a header in the 13th minute while Mewis assisted both goals for the Dash, continuing her strong run of form. Ali Krieger captained the Pride in their first home game of the Fall Series.

Saturday’s other NWSL matchup saw Sky Blue FC down the Chicago Red Stars, 3-1. Margaret Purce – one of the 27 players called into camp by USWNT head coach Vlatko Andonovski – tallied two assists for Sky Blue in the win. The Red Stars got on the board in the 89th minute as Morgan Gautrat headed in a set-piece service by fellow 2019 FIFA Women’s World Cup champion Tierna Davidson. Saturday’s match also marked the first Fall Series action for defender Casey Short.

Emily Sonnett played the full 90 minutes in Koppabergs/Göteborg FC’s 7-0 midweek win over Jitex BK in the Swedish Cup, and went the distance once again in the club’s 3-0 league win over Uppsala on Sunday. Göteborg has a four-point lead atop the Damallsvenskan standings and last conceded a goal on Aug. 29, pitching six consecutive shutouts in all competitions. Göteborg returns to action on Sunday, hosting sixth-place KIF Orebro.

After dropping a 3-1 decision to Liverpool in the first group stage match of the Continental Cup, Manchester United rebounded with a 1-0 win over Tottenham Hotspur in Saturday’s FA Women’s Super League clash. Tobin Heath and Christen Press both started for the Red Devils – their first match together in the staring XI — and nearly combined for a goal in the 24th minute after Press played Heath in on a perfectly weighted ball, but Heath’s shot was saved by Spurs goalkeeper Becky Spencer. Manchester United broke through in the 67th minute when Heath served a corner kick from the right side to the back post and found Millie Turner for a looping header that beat Spencer. It was Heath’s second assist in as many league appearances and helped Manchester United remain unbeaten in WSL play. Alex Morgan was not available for Spurs.

Manchester City suffered its first loss of the 2020-21 WSL campaign on Sunday, falling to defending league champions Chelsea, 3-1. Samantha Mewis started yet again in the Manchester City midfield and nearly opened the scoring in the 25th minute, but her strike at the end of a brilliant individual run clattered off the outside of the left post. Rose Lavelle came on for The Cityzens in the 60th minute and had a dangerous look in the 86th minute off a cross but was denied by the Chelsea goalkeeper.

Lavelle made her first start for Manchester City in Wednesday’s 3-1 victory over Everton in the Continental Cup and made the most of the opportunity, scoring her first goal for the club with a crafty heel-flick finish off of a corner kick.