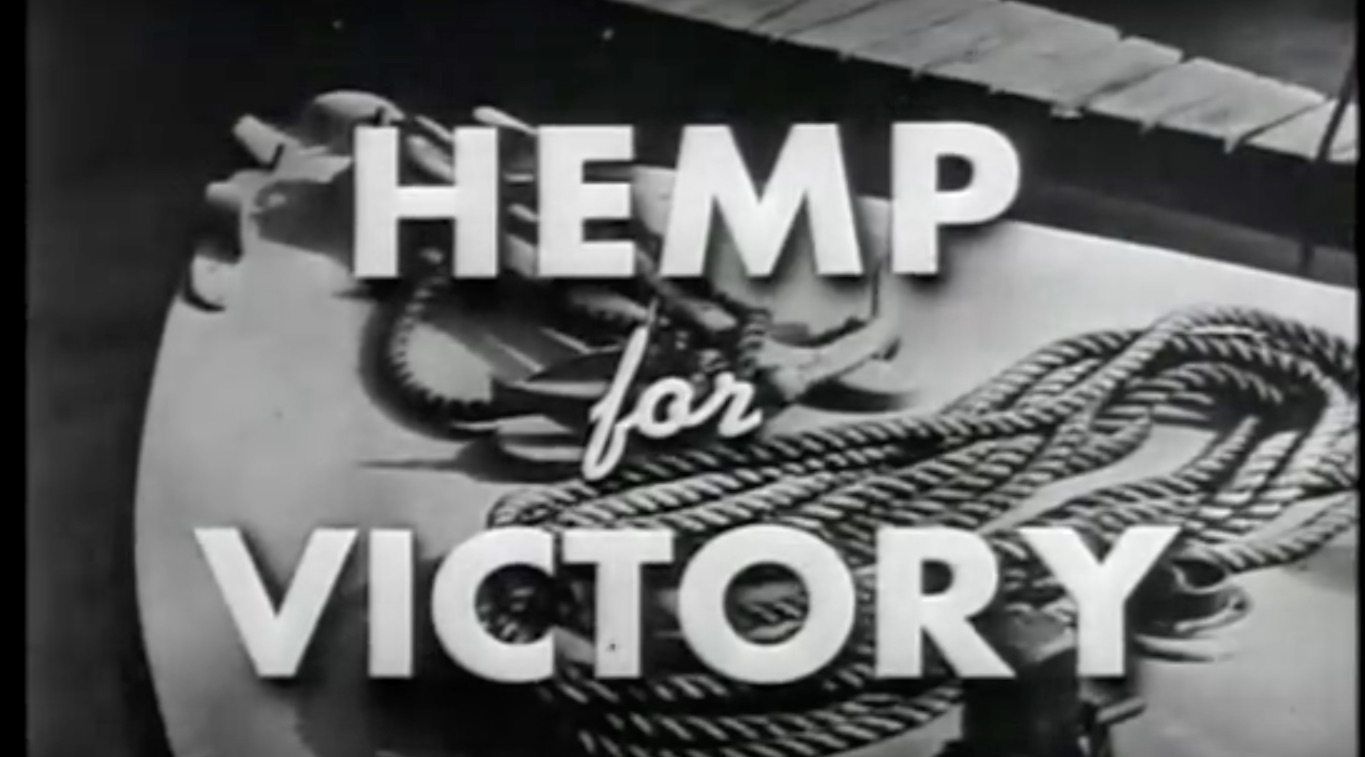 During World War II, the Allies desperately needed hemp. In response, the United States briefly reversed its stance and encouraged farmers to grow it. Afterwards, they tried to erase all records of this “Hemp for Victory” campaign.

Millions of people are rediscovering the benefits of hemp, both as a health remedy in CBD oil and a raw ingredient in dozens of hemp-based products. Far fewer are aware of hemp’s history in the U.S. as a cash crop, or the lengths that the government went to suppress that history.

One of the most remarkable examples is “Hemp For Victory,” an educational film produced by the USDA in 1942 that encouraged farmers to grow hemp. After the war, when growing hemp again became illegal again, the government hid the existence of the film for years until pro-cannabis activists forced them to bring it back into the light.

The story of “Hemp For Victory,” and indeed the facts laid out in the film itself, make it clear that hemp was once an essential part of American (and indeed, virtually all human) life, and could be once again.

Hemp was once a vital American crop

Before the U.S. made cannabis and hemp illegal in the aftermath of alcohol prohibition, they were everyday parts of many people’s lives. People made hemp into products like cloth, rope, and sails from the moment the American colonies began. The founders wrote early drafts of the Declaration of Independence on hemp paper, though they used parchment for the final version still preserved today.

“Long ago when … Grecian temples were new, hemp was already old in the service of mankind.”

From the USDA film “Hemp for Victory”

Smokable cannabis likely reached the United States in the early days of the 20th century. The common slang term “marijuana” reflects one likely origin as an import via Mexico. However, doctors widely used cannabis tinctures in medicine for at least a century beforehand. They were even available in many drug stores. For a brief moment in the early 20th century, “Turkish smoking parlors,” establishments for smoking psychoactive cannabis, were all the rage in American society.

Of course, all that changed with the beginning of the war on drugs. As alcohol prohibition ended, much of the same law enforcement apparatus that had targeted speakeasies and booze smuggling turned against cannabis in the 1930s. Even humble hemp was demonized for the cause of drug prohibition. Then, the U.S. military faced a wartime shortage during World War II.

Long ago when these ancient Grecian temples were new, hemp was already old in the service of mankind. For thousands of years, even then, this plant had been grown for cordage and cloth in China and elsewhere in the East. ... prior to about 1850 all the ships that sailed the western seas were rigged with hempen rope and sails.

For the sailor, no less than the hangman, hemp was indispensable. …

— From “Hemp For Victory”

“Hemp For Victory” is a fascinating film, not only because of its origins and the attempted cover-up, but for its contents. In 13 and a half minutes, the USDA offered a concise history of hemp that’s been largely censored from textbooks. Hemp was once a central part of human culture. Even today, hundreds of thousands of acres of hemp are legally grown worldwide.

It’s also remarkable that a government agency would flip flop on a core drug policy, going from banning to encouraging hemp, just about a decade after the war on drugs began.

As the film explains, “the culture of hemp in America declined,” though the cause had as much to do with drug prohibition as with the “cheaper imported fibers” the USDA blamed. In any case, under wartime conditions, imported hemp became dangerously scarce.

“Philippine and East Indian sources of hemp [are] in the hands of the Japanese, and shipment of jute from India curtailed,” explains “Hemp For Victory.”

After the war came to a close, hemp imports began again. And “Hemp For Victory” disappeared into government vaults.

Today, you can find “Hemp For Victory” in the U.S. National Archives, under record number 1682. But sometime after the film’s release and the end of the war, the U.S. government scrubbed its existence its records, including the archives. The USDA had even asked college libraries to remove the film from their holdings.

After decades in obscurity, in 1989 a number of cannabis activists, including the famous hemp expert Jack Herer, discovered or received copies of “Hemp For Victory” on VHS. Despite the film’s obvious government origins, inquiries to government agencies, from the USDA to the Library of Congress, came up empty handed. Here’s a typical response from one government official, as quoted in “The Great Book Of Hemp” by Rowan Robinson.

“We contacted the Washington, DC office of the Department of Agriculture and also the Federal Audio Center and have been unable to locate any film with the title ‘Hemp for Victory’ that was produced by any department of the federal government.”

Herer attempted to find the film at the National Archives to no avail, but in May 1990, a hemp researcher named John Birrenbach received a different answer from another archivist, who successfully discovered both reels of the original film. For a fee, Birrenbach received an official government videocassette copy of the film, finally definitively proving that it was a real USDA film.

Some Japanese-Americans were recruited from the World War II internment camps to participate in the Hemp For Victory movement. Heart Mountain Wyoming Foundation, which memorializes the residents of one camp, shared the story with us on Twitter. Over 14,000 people of Japanese descent were incarcerated at Heart Mountain in Wyoming, not far from Yellowstone Park in the northwest part of the state.

According to the Heart Mountain Foundation, Sadazo Uematsu, who had been able to leave another camp to work in the wartime hemp industry, came to Heart Mountain to recruit other Japanese people to take part in September of 1944:

Many Japanese Americans who relocated from WRA camps during World War II found jobs with industries that needed workers, so they returned to the camps to recruit. #OTD in 1944, the @HeartMountainWY Sentinel reported about the need for workers in the nation’s hemp mills. 1/4 pic.twitter.com/xTIqIZw0jS

After the war, Uematsu was able to return to Los Angeles, where he’d lived before removal. Of course, these hemp jobs could not possibly make up for the upheaval to the lives of so many innocent people of Japanese descent. We were still interested to learn that “Hemp For Victory” offered new opportunities for a handful of these people.

Can legalization bring a new victory for hemp?

Unearthing “Hemp For Victory,” and the other strides made by pro-cannabis activists like Herer and Birrenbach, helped modern Americans rediscover hemp’s great potential.

Today, the U.S. imports a lot of hemp from overseas. This can sometimes cause issues with quality and purity of CBD extracts and other hemp products. At the same time, high quality organic sources are available. U.S. farmers are once again growing hemp in the U.S. thanks to research programs that began in 2014. In 2018, the Farm Bill ushered in full federal hemp legalization.

Despite hemp legalization, some barriers remain to hemp’s success in the United States. Throughout 2019, the hemp industry struggled to access banking and credit card services and access social media. Some CBD vendors and truckers transporting hemp across state lines even faced legal trouble. At the same time, interest is booming with U.S. CBD sales expected to reach $1 billion this year.

Domestic hemp farmers once contributed to victory for the U.S. and its allies in World War II. Someday soon, hemp’s tremendous potential could once again represent victory for all the earth’s people.